Recent independent degradation tests of commercial lithium batteries reveal a big surprise! Contrary to the claims of many NMC-based lithium battery manufacturers, LFP chemistry is superior compared to NMC – it is safer, offers a longer lifespan, and is generally less expensive than NMC, NCA. 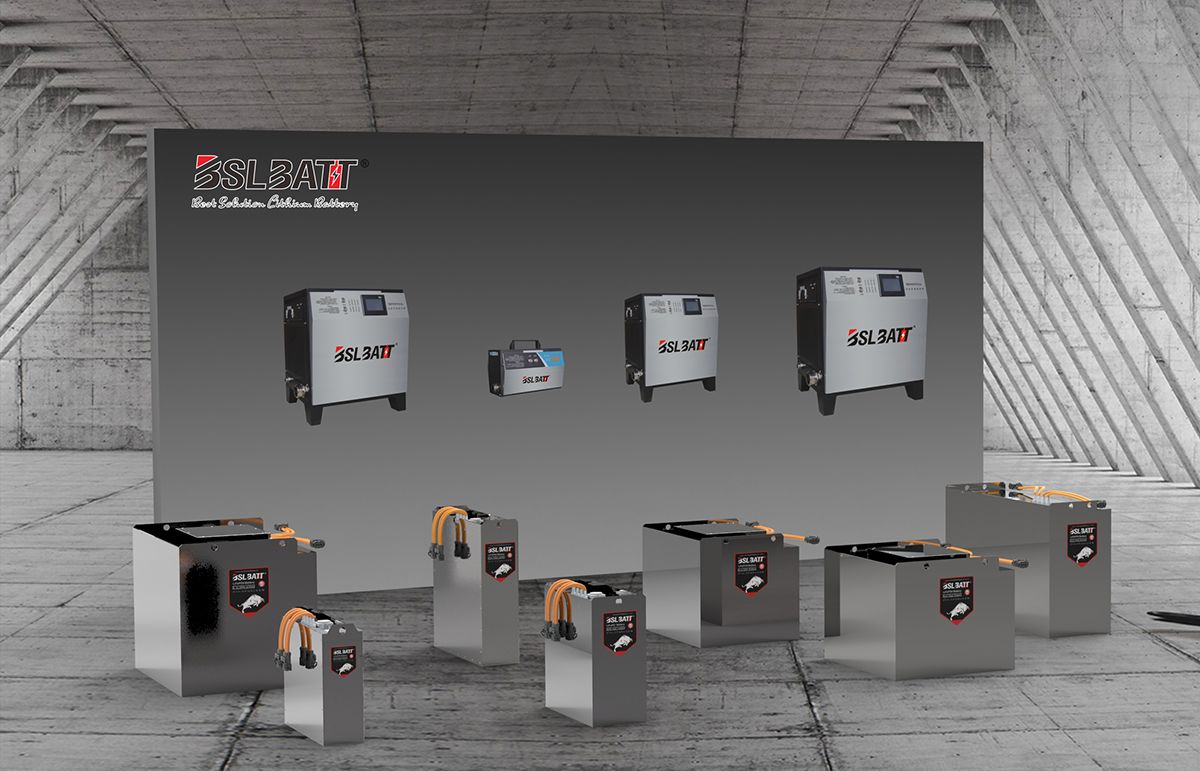 Of all the various types of lithium-ion batteries, two emerge as the best choices for forklifts and other lift trucks: Lithium Ferrum Phosphate,  or Lithium Iron Phosphate (LFP) and Lithium Nickel Manganese Cobalt Oxide (NMC). The LFP battery chemistry has been around the longest. NMC is a relatively new technology. However, that doesn’t always translate into being a universally better technology. In electric vehicles (EVs), such as cars and trucks, it’s often the preferred choice due to overall less weight and higher energy density per kilogram. However, in the warehousing environment, where ambient temperature extremes are possible and weight is not the issue, the LFP battery is widespread and conversely may be a more favorable choice. As a default, both NMC and LFP chemistries’ useful life can range between 3,000 to 5,000 cycles. However, with opportunity charging, that can be increased significantly, anywhere up to 7,000 cycle count. Whereas lead-acid shouldn’t be charged until it’s depleted to 20% battery capacity, Lithium-ion batteries thrive on what it calls opportunity charging. While the two types—LFP and NMC—operate similarly, there are some differences.

According to a 2020 paper from the Journal of the Electrochemical Society (Degradation of Commercial Lithium-Ion Cells as a Function of Chemistry and Cycling Conditions), LFP batteries have a longer lifespan than NMCs. This data contradicts the wide-spread notion that NMC cells are more durable and have a longer life span. These tests were first published in September 2020 but reached the news sections of material handing publications only recently. The authors of the article give one possible explanation – the data on real commercially available cells may vary with the change of manufacturing process, however subtle. Under strict test conditions, commercially available lithium cells of both types were repeatedly discharged and charged from 0% to 100%. The result? According to the paper, “The LFP cells exhibit substantially longer cycle life spans under the examined conditions.” The tests were performed at the Sandia National Laboratories as “part of a broader effort to determine and characterize the safety and reliability of commercial Li-ion cells.” The study examined the influence of temperature, depth of discharge (DOD), and discharge current on the long-term degradation of the commercial cells. LFP chemistry is superior compared to NMC LFP chemistry is superior compared to NMC All cells were charged and discharged at a 0.5 C rate or the amount of discharge that will deplete the full capacity of a battery in two hours. In the graphical representation shown (taken from the Journal’s 2020 technical paper), you can easily see that the discharge capacity retention for the LFP lithium battery (blue data points) far exceeded the NMC battery retention (indicated by the black data points) for each round of charge/discharge cycling. The graph indicates that the NMC degrades almost twice as quickly as the LFP, showing the superior overall performance of the LFP cells. The testing showed LFPs had a better RTE (round trip efficiency) than NMCs, calculated by dividing the discharge energy by the charge energy. This calculation shows that the LFP is the more efficient, economical choice. Lithium nickel cobalt aluminum oxide battery, or NCA, was also a part of this experiment and performed similar or worse than NMC. We do not focus on NCA in this article as it is not mainstream in the commercial use of lithium batteries for Material Handling, mainly due to safety and cost issues. Both NMC and NCA cells demonstrated strong dependence on the depth of discharge, with greater sensitivity to full SOC range cycling compared to LFP cells. LFP cells had the highest cycle lifetime across all conditions, but this performance gap was reduced when cells were compared according to the discharge energy throughput. 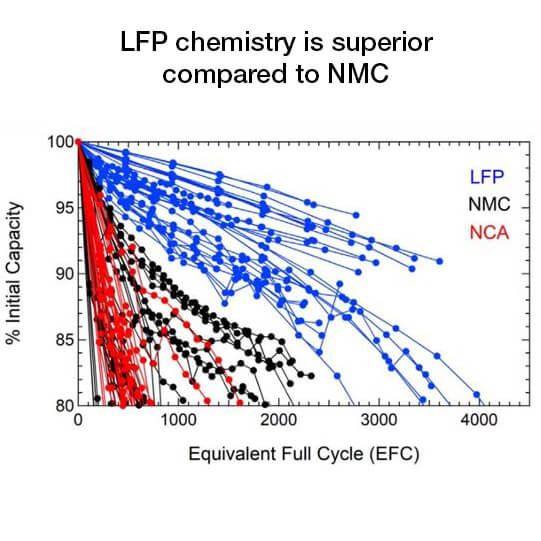 There is one other major difference between LFP and NMC often used as a selling point in material handling. NMC lithium ion batteries are sometimes charged at a higher, faster rate, often compared to LFP using a 0 to 100% charge cycle. However, there is a tradeoff. To do this, the cables and connectors must be beefed up as the temperature generated by the process is higher. Additionally, the individual cells must be insulated from each other to contain and dissipate the heat. This is usually done using ceramic shields, increasing the cost of the battery unit. LFP Lithium ion batteries normally charge at a lower rate, often up to 1.5 C rate. They can be fitted with dual plugs, however, that doubles the charge rate, while still maintaining a lower charging temperature. The current draw during the charging process is lower overall, potentially translating into a safer charge. In reality, the higher charge rate of the NMC is a non-issue. With the use of opportunity charging (which benefits lithium batteries), the battery should never become fully discharged. Therefore, charging from a fully discharged battery to a fully charged battery will rarely, if ever, be encountered. The takeaway is simple. Even though it may be promoted that the higher charge rate for NMC is possible, there is no measurable time savings increase nor downtime decrease to validate the necessity of charge rates over 1 C rate.

While NMC cells are often promoted as a newer, more advanced technology, they carry some other significant pitfalls. The flashpoint (the temperature at which a chemical will ignite) is significantly lower than LFP. The flashpoint for NMC is 419 degrees Fahrenheit, while LFP’s flashpoint is as high as 518 degrees. In other words, the NMC is more likely to ignite and burn under the right conditions. For example, a high charge rate contributes to thermal runaway, potential heat damage and is more prevalent in NMC battery pack than in LFP. Both the technology and chemistry of the NMC cause it to run hotter during both use and charging, requiring more heat dissipation measures. Ceramic tiles are used to separate the cells in an NMC battery for heat control. This is a measure not needed in LFP chemistry technology. While the NMC is a technology with potentially faster-charging rates and a slightly higher nominal voltage per cell (3.7V compared to LFP’s 3.2V), there are no distinct advantages to justify the higher purchase price. While exact pricing fluctuates with the market, an NMC battery costs somewhere between 30% to 50% more. The LFP chemistry is actually a safer technology and will perform well, and even outperform, the more expensive NMC. The LFP battery outperforms the old, less safe, and less efficient lead-acid battery. So does the NMC. But, when the total cost of ownership of forklift batteries is a driving factor, LFP may be the better choice.

We cannot skip the inevitable comparison to the lead-acid chemistry in this article, as this is still a prevalent technology in the forklift world. Lead-acid cells are wet cells. Electrical power is generated by liquid chemicals, interacting with the lead. The lead is converted into lead sulfate by a chemical reaction with the acid. When connected to a load (the forklift), the electrons move through it, balancing the electrons. Simply put, the battery is “discharged.” Recharging the battery reverses the process. While lead-acid batteries have been around the longest, there are some inherent pitfalls. For example, they do have a limited number of charge cycles, somewhere around 1,500. However, that also means that a cycle is used up every time you charge the battery. Ideally, the battery should be charged when it’s depleted to between 20 and 30 percent remaining charge to avoid capacity loss. Charging when the capacity is less than 20% can damage both the battery and the lift. Charging more often, say above 60%, and you’re wasting charges. The battery’s life will be shortened. The charging/discharging processes also give off toxic and flammable gases. This makes lead-acid hazardous, both during operation and charging. Lead-acid batteries are also maintenance intensive. If water levels are not monitored and maintained properly—both high and low levels—battery life is shortened, and dangerous conditions can arise. Finally, to properly maintain these batteries, you need to follow the 8-8-8 rule: eight hours of use, eight hours of charging, eight hours of the cool-down period, again, to avoid battery capacity loss due to the degradation mechanism of this technology. That means the battery can only be used during one full shift in 24 hours. And that means that you must have an additional backup battery to swap out for each work shift. Compared to lead-acid batteries, both NMC and LFP Li ion batteries have a longer overall lifespan and a significantly higher number of charge discharge cycles. Unlike lead-acid, lithium-ion chemistry thrives with frequent charges. Their usable life is increased by opportunity charging during breaks and lunches. Additionally, battery maintenance is minimal compared to the lead-acid battery. You don’t need to monitor the electrolyte levels because they’re non-existent. And battery room ventilation isn’t required since there is no dangerous gassing during the charging process. Most of the condition monitoring is done by the battery itself using advanced electronics of its battery management system.

In choosing the correct battery for your operation, don’t go by initial cost alone. Consider the overall cost of ownership during the life of the battery. The safer operation and longevity of lithium-ion chemistry should be factored in. A battery with lithium-ion chemistry makes better sense, from both an operational efficiency standpoint, and the increased safety factor afforded. Even so, don’t make the decision quickly, without weighing the pros and cons of both NMC and LFP battery chemistries.

● NMC is an excellent choice for electric vehicles. But the price tag may not be worth it for forklift and PIT (powered industrial truck) use. Overall, there is no significant performance increase, and LFP technology demonstrates a slower battery degradation and a longer cycle life when handled properly.

● While some NMC batteries may offer a faster charging rate (possibly up to 3 C rate), that isn’t necessarily a requirement due to opportunity charging. You rarely charge a battery from 0 to 100 percent.

LFP batteries charge at a lower rate, but the rate can be increased easily if it is a requirement.

● Contrary to existing perception, the data shows that LFP cells have the highest cycle lifetime across all conditions.

● Both Lithium-ion types are much safer than older lead-acid technology. However, the lower flashpoint of the NMC (419 degrees Fahrenheit) increases the possibility of a fire hazard, particularly at the high charge rate.

BSLBATT Lithium is one of the largest developers, manufacturers, and integrators of lithium-ion batteries for lift trucks in China. The company sells large quantities of industrial batteries for various equipment. It successfully collaborates with several OEM market leaders. BSLBATT Lithium is a “change ambassador” for the international implementation of the new technology. The company continuously invests in technological development. It has been exploring new chemical compositions that could further reduce the cost of the product while improving performance in order to continue replacing traditional lead-acid batteries. BSLBATT Lithium forklift battery systems are built with LFP cells, which have become the benchmark of reliability, longevity, and safety. For more information on how to partner with BSLBATT Lithium, please contact Haley Ning via email at inquiry@bsl-battery.com or call him at (86) 752-2819-469. For more information on BSLBATT Lithium., please visit www.lithiumforkliftbattery.com/about-us.html